I saw Paradigm mentioned via Rock Paper Shotgun awhile ago; the reference to a SCUMM style title immediately piqued my interest and we were fortunate to run into the Dev Jacob Janerka a few weeks later at the Perth Games Festival. 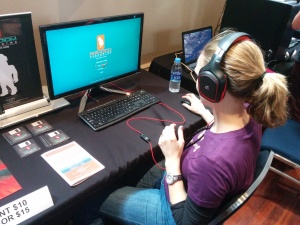 Dwight and I had a chat and looked on while Katy had a crack at the demo. Jacob does not hail from an IT background as such, being more of a graphics guy, which is evident from the care which has gone into the art style. The game is developed using Visionaire, which allows you to create cross platform adventure games in a scripted fashion without a heavy reliance on coding ability, although you can customize using LUA scripts if needed. Jacob’s enthusiasm for point and click adventure games was evident throughout our conversation and later when I played the demo for myself.

In hindsight, I could perhaps describe the overall theme as a postapocalyptic mutant child of Sam & Max / DoTT with a dash of Austin Powers, set in a quasi ukranian 60’s esque nuclear fallout zone. Simple! 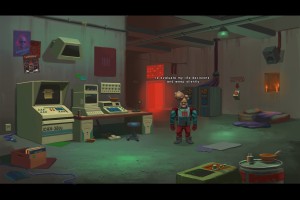 Running the Alpha demo is straightforward: download from the Paradigm Website link, unzip, and run the exe. It initially only rendered on part of my screen, but creating a shortcut and checking the ‘disable scaling for high DPI monitors’ option worked a treat. I’ve noticed a couple of games already which don’t support the super crisp res of my Surface Pro 3 particularly gracefully so was ready to be forgiving of Paradigm if there were any hitches, but it turned out I didn’t need to.

It took about 40 minutes to play through. There is a tutorial which I didn’t encounter as I selected the ‘I’m an adventure game pro’ option (Yes, I do know all about three headed monkeys) and jumped right in.

Janerka’s affinity for classic Lucasarts styling is clear, including several overt homages/ references to Day of the Tentacle. Progressing from one area to the next even triggered a “MEANWHILE…” in-game cut scene which should ring familiar to DoTT veterans. I also found the cut scene reminiscent of Sam and Max Hit the Road, along with the in-game map, although the game maintains its own aesthetic, mostly down to the art style. 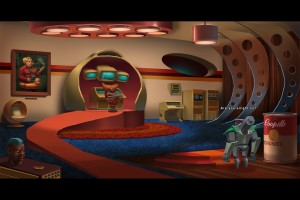 Although there are a few menu options for interaction, I navigated around the demo using mostly the ‘use’ function. A good bit of work has gone into the dialog, with plenty of conversational options available for the NPCs I encountered. The humor is offbeat in a kind of lighthearted self deprecating manner, and the fourth wall is smashed without ceremony, including several references to the game designer. I’ll be curious to see how this style carries on in the full game or if it will be found more in the introduction / demo.

The demo ends the third areas, and while I encountered a couple of bugs, none were showstoppers. Unexplored areas on the map promise more to come from the work in progress. I’ll certainly be interested to see the full version. With the modest kickstarter goal met, Jacob reports he’ll be able to spend his time completing the game as well as putting funds towards music and sound design. 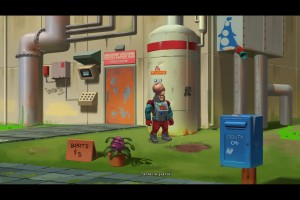 Head on over to the kickstarter page to show your enthusiasm for the old ways of point and click and reserve your copy of Paradigm.