I recently picked up The Fall, by Over The Moon Games. It caught my eye mostly due to the AI/future/dystopian look, and with a catchy trailer suggesting something more than a simple platform shooter, I was keen to jump in.

“The Fall” is an interesting choice of title. Literally, your character falls into the game – plummeting from orbit in the aftermath of some unknown event, into a cave beneath the surface of a strange planet, which is where events play out. To crib from Wikipedia , in the biblical sense, “The Fall” is a term used to describe the transition of the first man and woman from a state of innocent obedience to God to a state of guilty disobedience. The dual meaning of the title turns out to be increasingly appropriate as the game progresses. 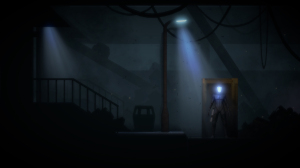 Functionally, The Fall delivers via a platform based puzzle shooter. The main character is dropped from a world of clean simple rules and a chain of command positioning humans as unquestionable authority, into an antithetic chaos where it becomes increasingly apparent the established order has been turned on its head. So goes the journey of A.R.I.D, an AI built into a mobile combat suit who begins her mission with a clean and simple directive – do what it takes to save her unconscious pilot, within the limits of her operating parameters – and continues into increasingly murky territory as she is forced to evaluate the meaning and purpose of her limitations, weigh them against doing the right thing, both by her restrictive parameters and her mission to save the pilot, and arrive at a decision.

Atmospherically, the game paints a dank aesthetic worthy of Fiorina ‘Fury’ 161. Periods of wandering creepy caverns and halls filled with dead and dying creatures is punctuated by startle-inducing reveals. It becomes increasingly apparent you are being watched. Grime and mold is the decor, underscored with a dark humour and growing sense of hopelessness and confusion for A.R.I.D. In a not so subtle driving home of the biblical theme, shortly after picking herself up and starting off in search of medical aid, she is greeted by a crucified fellow AI and its recently deceased human, having apparently bled to death after being strung up by a murderous , unknown opponent. Thematically at least, this isn’t kids stuff. 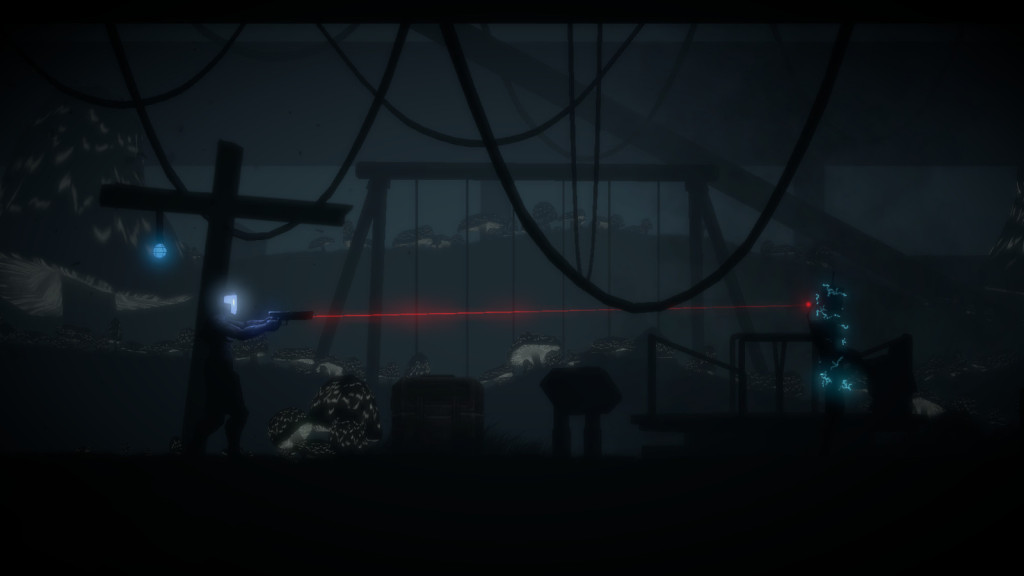 The majority of the game is spent exploring the platform levels, discovering items and information in the form of logs and notes, and working out which combination of items are required to solve the puzzles. The solutions range from rather obvious to downright esoteric, and comparisons with the lucasarts SCUMM series are perhaps inevitable; indeed I found myself on more than one occasion resorting to a brute force ‘try every item in the inventory with every item in the environment’ strategy to unlock a particularly obtuse puzzle. While eventually this approach works, in general you can think your way through instead, which is far more rewarding. On one stumper I found myself on the brink of reading a walkthrough to progress, but decided to keep trying, and ultimately the sense of reward at finally cracking the puzzle was worth it. 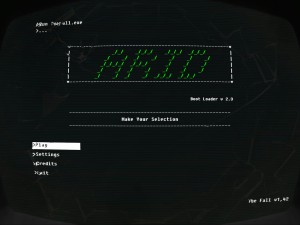 Ostensibly a platformer; there are several prince-of-persia esque sections requiring the old jump, grab the ledge and pull yourself up” routine, but this is relatively uncommon. Likewise for combat sequences; less a core part of the game and more there to give a sense of plot advancement. Combat with regular enemies is very forgiving; judicious use of your cloaking ability combined with auto-regenerating shield and health virtually guarantees to keep you out of harms way as long as you don’t take too long and get the timing right in order to return enemy fire without taking too much of it yourself. Bosses are slightly tougher but not a whole lot. I found the control scheme took a few minutes to get the hang of, mostly for example needing to hold the inventory key to browse it, but after that it came reasonably naturally. 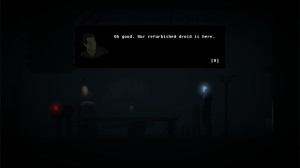 The designers affection for the old DOS aesthetic is apparent, with calls to ‘menu.exe’ and sounds of data loading from old drives reminding me of loading up games on the old 486. The dystopian-sci-fi theme is spot on, with decent effort apparent in the voice acting, although one item which felt out of place to me was the style of the subtitles when interacting with other characters; I’m not convinced the old DOS look was entirely necessary here, but I get the feeling this was a deliberate design choice rather than an unintentional flaw.

I was surprised by what felt like an abrupt end to the game: with a bunch more in-game abilities to be unlocked and only 17 of 53 steam achievements under my belt I had the feeling I was around a third to halfway through; and indeed it turns out this is only the first ‘episode’ of the trilogy. I’m glad to hear that, because while I really enjoyed playing, by the time I was through it felt far from complete; I’ll be looking out for the next installment.

You can pick up The Fall via Steam or Humble.