I was reminiscing recently about the brilliance of Tetris on the original Nintendo Game Boy, which my sibs and I played obsessively back in 1993. I downloaded the Android version for my HTC, and I’m looking forward to reimmersing myself next time I need a quick distraction. Anyway, my little reminiscence led me to Google and a few Tetris-related things.

Firstly, a great article by Boston Globe writer Billy Baker about his wife Lori Baker, who didn’t realise the 500 or so lines she achieved during casual Tetris sessions was incredibly, unusually high. She was invited to compete for the world record in 2007. Read the article – it’s great – and just ignore the inexplicably crap design of the website it’s featured on.

The most amazing swimsuit I’ve ever seen

Gizmodo UK describes this swimsuit as “just a terrible idea that not even a gorgeous-looking model can really pull off.” You know what, Gizmodo? You don’t get to decide. Because I think it’s BRILLIANT and I would wear the SHIT out of that suit if BlackMilk clothing still made it. 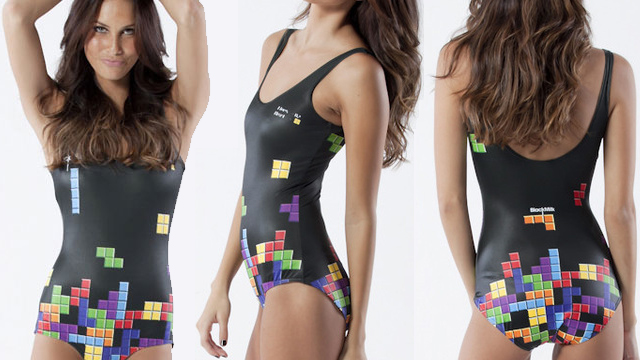 Now I can play Tetris without a device

Because I can play it on my t-shirt instead! You know, it’s hard to top the brilliance of the sheer simplicity of Tetris. Four-block shapes, a one-way rotation, a basic premise. Thumbs up to original creator Alexey Pajitnov.

But Marc Kerger, who thought up the idea for this glowing garment, gets a pretty strong thumb twitch too.