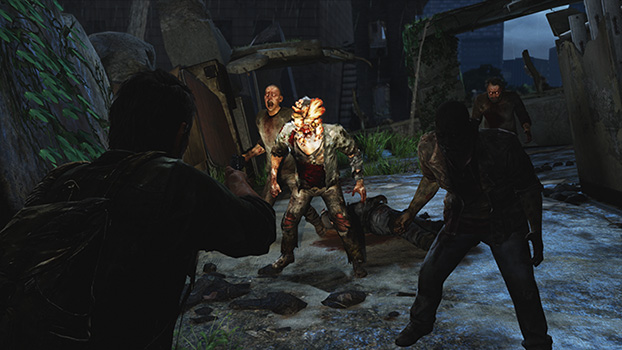 There’s a point quite early in The Last of Us when you find yourself confronted with four runners and one clicker, all of whom you have to kill to proceed. It’s the first major hurdle in the game and can be pretty discouraging if you’re not great at using the controls yet. I died over and over and over again until I eventually defeated them. Here’s what worked for me:

Of course this is by no means the only way. Here’s a completely different method from YouTuber SBDGamingHD. It involves taking out the first runner like I did, then staying in that spot until the runners in the distance have moved as far past the clicker as possible. From there, shoot the clicker as quick as you can, then whip out your pipe and start bashing away at the runners that swarm up.

And here’s a walkthrough from theRadBrad, whose commentary I love. It was comforting to see that he didn’t just cruise through it the first time, although it didn’t take him long.

Feature image credit: Naughty Dog. Note that at no point in the game do the runners and clicker just stand there gazing at you casually. This pic’s pure fantasy.